A Blog by any other name...

So I'm thinking of changing the title of my blog. Not the address, lest people not know where to find me, but just the title. I want something a little more unique and clever (or maybe just funnier) than what I have now. So does anyone out there have any ideas?

I was thinking about changing the name to "The Spinster 'Hood". Oh course then my friend pointed out that it sounded too much like "The Sisterhood of the Traveling Pants" and would feel like it needed an ending. I then suggested "The Spinsterhood of the Wandering Uterus" (Supposedly in the old days all sorts of maladies were said to be caused by a wandering uterus. Jenn did you first tell me about this? Anyway...), but then I decided I would get google hits from people not wanting to find out about spinster issues, so I nixed that idea.

My friend suggested "Spinsterology: the study of all things spinsteral." We got a good laugh out of that and thought it would be fun. What do all y'all think?
Posted by Spinster in the City (SitC) at 9:55 PM 2 comments:

I made a mistake grocery shopping the other day. I usually like grocery shopping. I like to look for deals and interesting foods that I've never seen before, but on this day I did not like shopping. I had decided instead of getting a huge cart that I didn't need or carrying around a basket that was too small, I would get one of those smaller carts that are about a third the size of regular shopping carts. That was my mistake because as soon as I started using it I felt this huge stigma of singleness fall over me. I felt like I was carrying a big neon sign that said single and alone. Who knew that a grocery cart could have such connotations, but every person I saw in the store with a similar cart looked like a middle aged divorcee or at least very single.

I know this sounds silly, but sometimes I like a certain degree of anonymity when it comes to my single status. And really I'm not the only one. What single person likes to go to a sit down dinner by themselves and then catch a movie by themselves? I mean they will eat dinner and watch a movie alone at home, but they won't do this in public, right? I actually did this once a few years ago, just as an experiment to see how it would feel. I went to a sit down Middle Eastern restaurant all by myself and ordered a meal and ate it alone. It was a tad awkward, but mostly it was just boring. I hadn't brought anything to read so I just kind of sat there. I think the waitress did give me a few odd looks. Then I went to a movie at the theater by myself. Once the lights were turned off and the movie started it really felt like no big deal. Actually in truth my night on the town by myself didn't feel any weirder or more awkward than pushing that little grocery cart around Smith's. Isn't that funny? 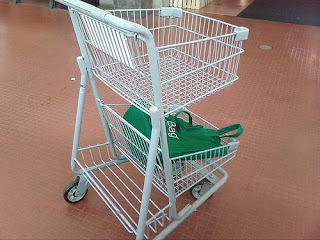 The cart in question

I think there are actually a lot of things, big and small, that make us remember our singleness and not in a good way. Another small thing is sleeping in a twin bed. Yes, I still sleep in a twin bed because I have a small bedroom and yes it does make me feel like a freshman in college, and not in a good way. The big things are holidays like Christmas and Thanksgiving. Let me tell you that having only one sibling makes it uber weird and boring at Christmas when she goes to her in-laws house instead of ours. It's just me and my parents. That is really when I miss not having a husband and kids. Oh well what can you do? Hate Christmas? Of course not. Does anyone out there have anything that makes them feel particularly single and if so what is your remedy?
Posted by Spinster in the City (SitC) at 9:56 AM 10 comments:

What I rant and rave about

Spinster in the City (SitC)
Update: No longer in Salt Lake and no longer technically a Spinster, but I will always be one at heart! (Living Single in Salt Lake City. Not a bad existence, but I'm tired of feeling like a second class citizen!)